Did you know that over 700 movie and television productions have been filmed in Douglas County and Douglasville? The Douglas County Film Trail is a self-guided tour of the various film locations through Douglas County! Visit filming sites used in your favorite television and movie productions, like The Hunger Games, Stranger Things, The Walking Dead, The Founder, and so many more! www.douglascountyfilmtrail.com 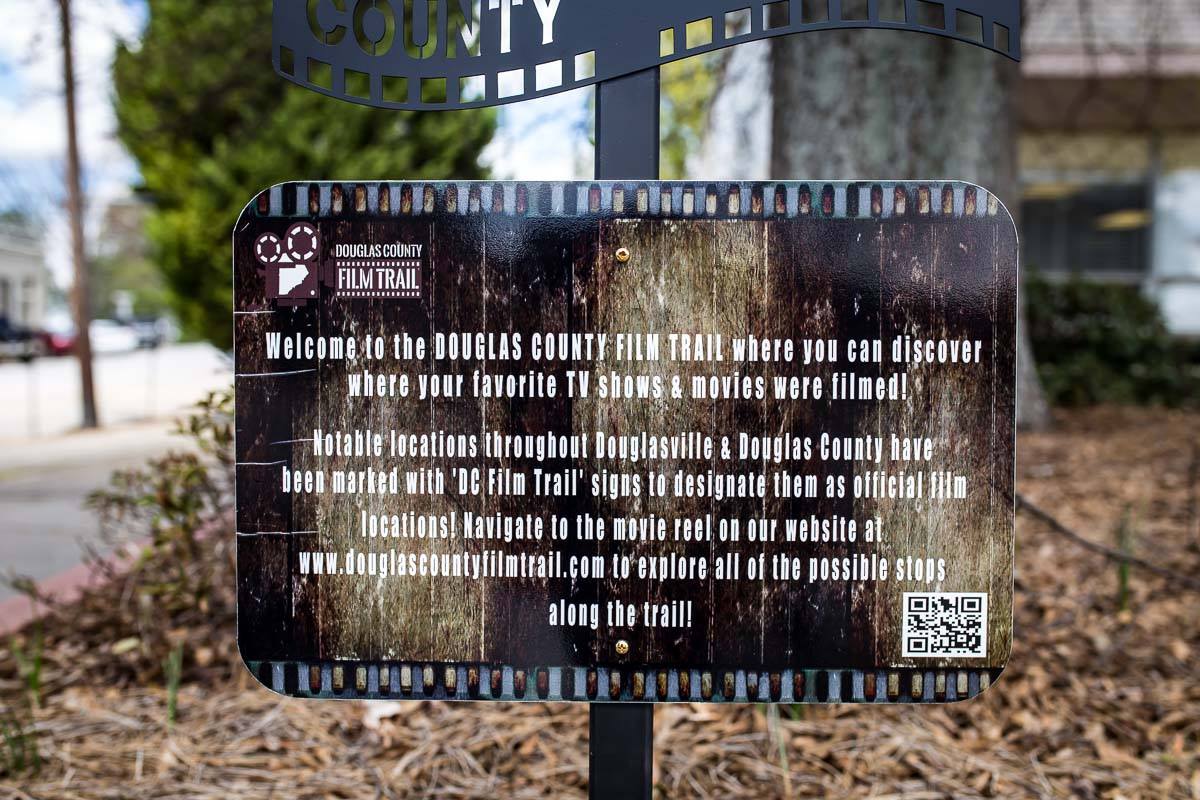 Downtown Douglasville is a mixture of small-town with modern amenities, thriving with activities and historic sites. That’s one of the reasons the downtown area has attracted several film companies. As you travel along the Film Trail, you’ll find some of the locations where films have been made marked with distinctive signs: an old film camera. The downtown area, with its plaza, is one of these sites. For a few weeks in 2015, an old-style McDonald’s restaurant was temporarily set up on a closed section of Church Street, which was transformed into a 1950s era midwestern town for the filming of "The Founder," a biopic starring Michael Keaton ("I’m Batman!") as McDonald’s mogul, Ray Kroc.

City leaders have worked hard to preserve the historic, old structures of downtown, and these distinctive structures have found favor with location scouts for several films.

Located at 6840 Church Street, the old Douglas County Jail (decommissioned in 2013) has been home to more lm sequences than any other location in the county - if not in the entire state. That’s because the facility has been preserved as if it were still functional, and so it has an authentic look that really appeals to filmmakers. Although most often used as a jail, the facility is also suitable to be a school (albeit a pretty grim one), a hospital or even a quite believable mental institution. Among the film productions that have used the old jail as a backdrop was the TV series "The Haves and Have Nots," based on a play by Georgia resident and actor ("Medea"), Tyler Perry. Other productions have been scenes for "Swamp Murders," "Your Worst Nightmare," "Very Bad Men", and "MacGuyver. 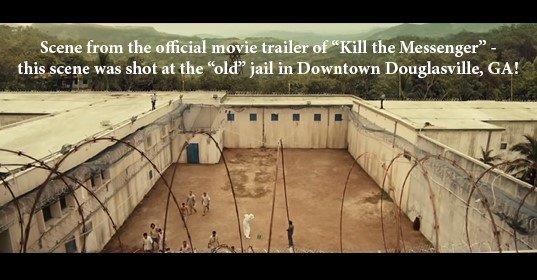 Located at 6754 West Broad Street in Douglasville, the Old Courthouse is listed on the National Register of Historic Places because it is one of the few structures left in the nation built in an architectural style known as International. Built-in 1956, it stands on the exact spot where the county’s previous, Victorian-style courthouse stood. Both "The Last Punch," and "The Founder" had scenes filmed in and around the courthouse. Who knows what films or other productions will use this unique and distinctive location next?

Sure, our fourth stop, the mall, - with its IMAX theater - is a great place to watch a movie, but would you believe it is also a good place to film a movie? Located at 6700 Douglas Boulevard, this shopping mecca has appealed to several location scouts shopping for a place to film a scene or two. One such production was "Big Mommas: Like Father, Like Son," the third installment in Martin Lawrence’s "Big Momma" franchise.

The first season of the Netflix series "Stranger Things" became one of the most popular shows of 2016, and critics and audiences alike are waiting to see what happens next. Douglasville played a cameo role in several scenes from the first year. Two of them were at the Old City Building, 48 Pray Street, and the Fair Mart, 7703 U.S. Highway 78 in Winston. The Old City Building played the "role" of the police station very early in the first season of the show.

Along with being one of the area’s premiere attractions for recreation and nature walks, Sweetwater Creek State Park - with an authentic textile mill left in ruins after an 1864 federal cavalry raid - is considered a perfect backdrop for film directors interested in unusual locations, particularly if they are in a pristine, natural environment. In "The Hunger Games," Katniss (played by actress Jennifer Lawrence) and Gale (Liam Hemsworth) explored several sections of the park. Many of the scenes for John Travolta’s "Killing Season" were also filmed at the park.

Zombies are crawling around the Georgia woods, as anyone who has seen the extremely popular AMC series "The Walking Dead" can tell you. The first season of the show opened in metro Atlanta, and many locales around the city, including some in Douglas County, have featured in the show. In episode five of the first season, the RV carrying the show’s cast had an unfortunate breakdown along Riverside Parkway near the River Road intersection. And if you want to see the place where Rick kills his first zombie, just head out for the intersections of highways 154 and 92.

Tributary Neighborhood is home to many young, diverse professionals. The aesthetics of the homes and settings here have led many filmmakers to use Tributary as backdrops and backgrounds for their scenes. These productions have ranged from comedic dramas like "Killers" to kid favorites like "Diary of a Wimpy Kid."

Foxhall is prestigious, privately owned resort has plenty of indoor and outdoor amenities that are perfect for Hollywood types. The majority of the movie "Table 19," starring Lisa Kudrow, Anna Kendrick and Craig Robinson, takes full advantage of the resort’s unique architecture and scenery.

Douglas County officials are working hard to maintain its balance of natural beauty with urban conveniences - and, what’s more, they are holding on to the county’s past by preserving its historic structures. Because the area has already drawn the attention of some of the nation’s leading filmmakers, there’s no reason to believe that more are on the way, and new stops will be placed on the Douglas County Film Trail.